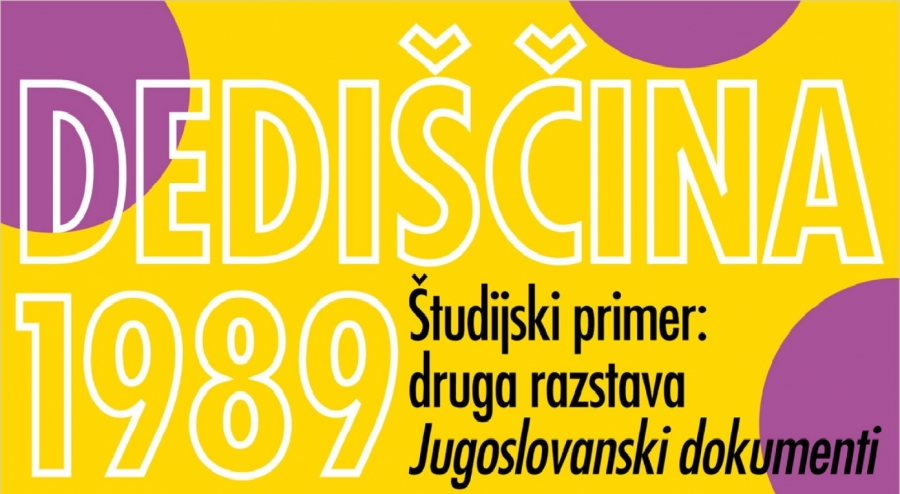 The exhibition The Heritage of 1989 in Ljubljana is far from a reconstruction of the Sarajevo Yugoslav Documents exhibition, nor does it try to underscore its significance or critically evaluate it. Our interest in the Sarajevo exhibition is “just” as a case study, since it was the largest of all exhibitions that featured the word Yugoslav in its title.

Exhibitions of Yugoslav art were one of the tools used in building a common cultural space and looking for possible common traits in Yugoslav art. We can say that various politically motivated exhibitions of Yugoslav art presented the idea of the common in an affirmative light, often quelling the otherwise continuously active antagonisms of various kinds. A clear indicator of such is the selection criterion according to republic, i.e. the politically approved quotas of artists from different republics. And the common was more than just an idea vigorously advocated from above; it was built by the citizens of Yugoslavia through countless interactions made possible by the common state and its ideology and politics. Thus the common in our case is the common knowledge and common experience that evolved in a space where multiculturalism and collectivism underpinned the state ideology, whose inconsistencies were constantly criticized and also corrected by progressive artistic practices. The common in Yugoslav space must thus also be considered in terms of the difference between the ideological and the anti-ideological – this is where its particularity lies, and this is our heritage.

Our exhibition addresses questions related to preserving such a heritage today, when there are no longer any citizens of Yugoslavia, i.e. subjects of such a heritage, and what the place of this heritage might be. We can look for the experience of the common as described in art, literature, or theory, but there is another possibility, that of its reactivation, of its repetition under altered sociopolitical circumstances. Both our exhibition and various informal cultural networks prove that the common as described above is now most frequently reproduced in contemporary art, which seeks answers to burning questions through local sociopolitical tradition, through its visions and a critical attitude to its digressions. With repetition in art, also the collective social memory is being preserved, which in a way makes art itself the best guardian of its heritage. Unlike the other instruments of its protection, art always assumes its heritage to be inherently conflictual, never complete in itself, and always with something missing.

This incompleteness of heritage is the prime focus of our exhibition, which departs from the proposition that heritage is not unproblematic and given once and for all. A repetition of the Yugoslav Documents thus cannot be effected simply by reconstructing them, but can only be a repetition of the difference between what is present and what is absent, between what could be seen at the Sarajevo exhibition in 1989 and what was not visible or tangible. The heritage of 1989 is thus what flew under the radar of the Sarajevo Yugoslav Documents, but what would nonetheless have been unthinkable without that show. And the best way to preserve the heritage of 1989 is to think it, and to think it together in the real time of the exhibition. In order to make that possible, the Heritage of 1989. A Case Study: The Second Yugoslav Documents Exhibition project cannot be merely a static exhibition of works that were presented in Sarajevo, but can only be an event in real time, developing through various formats. Our exhibition has six such formats, or dispositifs, that try to make the heritage of 1989 available for our use today:

1. An exhibition of artworks: Most of the original works from the Yugoslav Documents exhibition, the photographs of the works and installation views of the exhibition in Skenderija are on view at Moderna galerija. In addition, the exhibition includes a number of contemporary works by artists from the region of former Yugoslavia on the subject of war and migrations.

2. The covers of the main daily newspapers from all Yugoslav republics with comments by Tomaž Mastnak: The Yugoslav Documents exhibition dealt primarily with the art of the 1980s, in terms of its particularities in the different republics and the possible common Yugoslav specificities. The Ljubljana exhibition has added the sociopolitical context to this, and placed it in relation to the current neoliberal rule and the migrant crisis.

3. Installation by Azra Akšamija: The basic motif of this installation is related to the traditional Sarajevo rug, whose symbols and patterns are transformed featuring new symbols. The symbols are derived from plans and elevations of buildings representing the forces of integration and disintegration in each period. In this way, the integrative and disintegrative role of institutions in the formation of the common is underscored.

4. “Long Durations and Ideas of the Future” – a series of interventions in the form of discussions and workshops on the subject of social antagonisms focusing on the social antagonisms of the post-Yugoslav political space through the prism of material and ideational heritage, the continuity of cultural networks, and the potential that the shared Yugoslav experience holds for the future. Open to participants from various part of former Yugoslavia, this program has been conceived by the Zagreb-based collective BADco.

5. Actions involving refugees from the territory of former Yugoslavia, mostly Bosnia and Herzegovina in the early 1990s, and those that arrived in Slovenia recently, mostly from the Middle East. (Azra Akšamija’s opening performance Digesting Dayton and weekly workshops of embroidery by women of different generations; migrants as museum attendants and exhibition guides).

6. Toward the end of the year, the archive of The Heritage of 1989. A Case Study: The Second Yugoslav Documents Exhibition, which includes also some archival material of the Yugoslav Documents ’89 EXHIBITION IN Sarajevo, will be presented at the Collegium Artisticum exhibition space and at the Gallery of Contemporary Art Charlama in Skenderiji (Sarajevo).