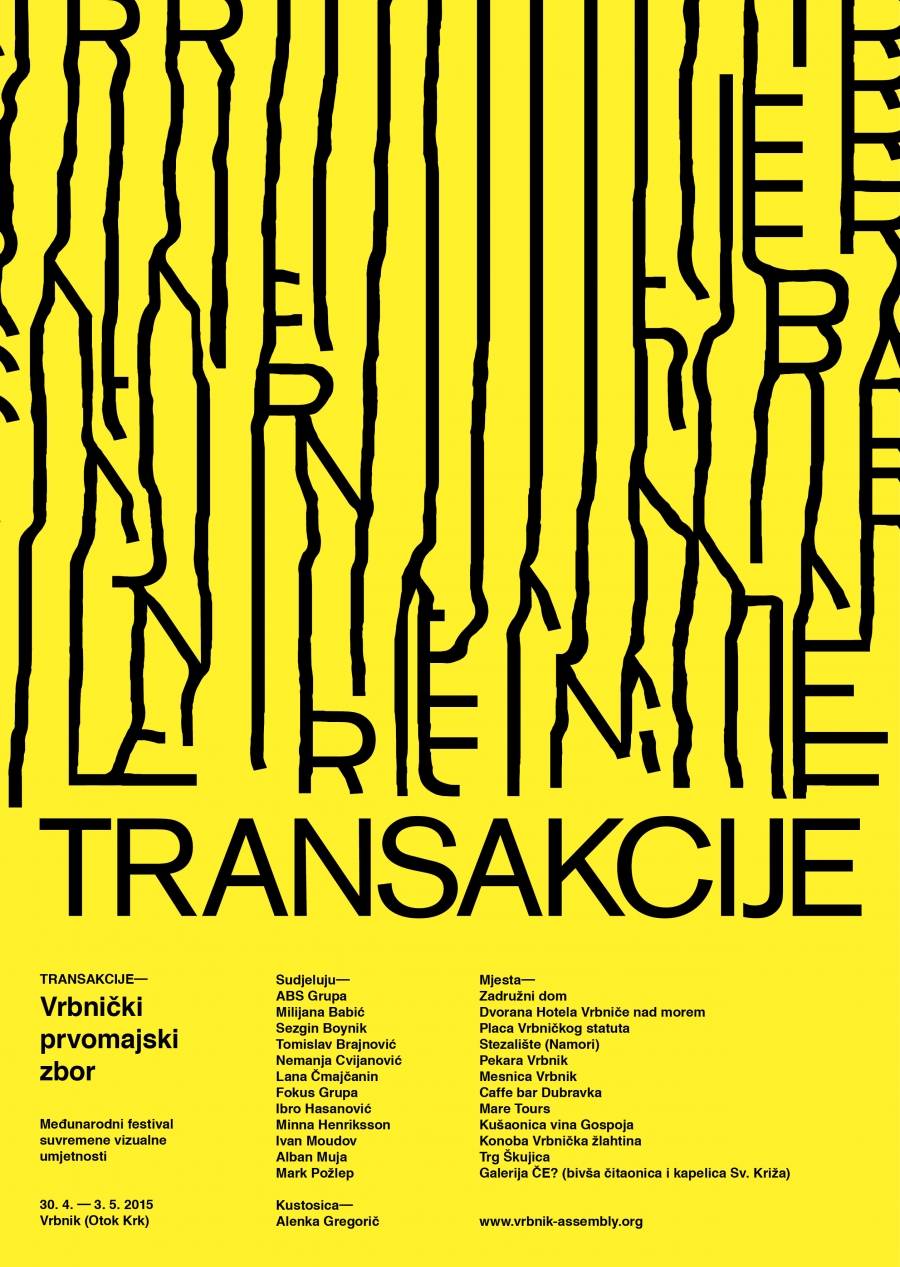 The Festival of contemporary visual art and theory
Vrbnik May Day Assembly — Transactions
30 April - 03 May 2015
Opening on Thursday, 30 April at 7 P.M.
Vrbnik
Island of Krk, Croatia

Friendship and art often go side by side. Where does the professional turn into personal – the question is hard to answer. Within the art system, there are no strict written codes or rules that would govern the system's behaviour as can be found in other areas of public activities; however, long-term collaborations do encourage friendly ties, and vice versa: professional connections are made through friends.

For the eighth consecutive year, a group of artists, curators and designers is meeting in the town of Vrbnik to commemorate May Day, the only international holiday celebrated by everybody in the region regardless of their ethnicity or religion. For all these years, discussions about art, the development of new projects and an exhibition, and the informal company of friends have kept us coming together at the same time in the same place. It's like a course that one attends every year in order to follow the professional lives of one's colleagues, meet old acquaintances, open new chapters of collaboration and make plans for the future. Most of us have been collaborating professionally for years and have co-organised a number of exhibitions both locally and internationally, and all participating artists have impressive international references. A decision to organise a joint public showing in the town of Vrbnik during our assembly was thus only a matter of time.

It was almost inevitable that the holiday would be mentioned in the discussions leading up to the project, but the starting point for the selection of works (mostly exhibits of existing projects) was nevertheless dictated by the distinctiveness of the location itself.  That is to say, the works are located in various Vrbnik locations that we've been visiting all these years, mostly for practical reasons, such as the butcher's, the restaurant, the bar, the exchange office, the info point or the abandoned hotel, as well as in streets and various houses, which will all turn into exhibition spaces for the project. We have collaborated with the artists to pick the right work for each of the chosen locations, such that the location leads to different readings and interpretations of the project that is being represented by the work. Doing this we have also involved the locals with the process, as the exhibition is only possible with the consent and help of the town, of the owners and administrators of the various locations.

The project's title Vrbnik May Day Assembly / Transactions is based on the phrase "exhibitions-actions" and represents something of an homage to the artistic practices of Croatian conceptual artists of the 1970s. That is, the term "exhibitions-actions" refers to the specific forms of activity practiced from 1975 to 1981 by Grupa Šestorice avtora (the Group of Six Authors) in four cities – Zagreb, Belgrade, Venice, Mošćenička Draga. And the title, of our project also states the time and place of the meet itself. In this way, the title itself alludes to the possibility of transferring the project's form to other cities and other time-frames. The Vrbnik May Day Assembly / Transactions  could thus represent a single step in the development of friendly and professional ties between the participating individuals and institutions in which these individuals work.