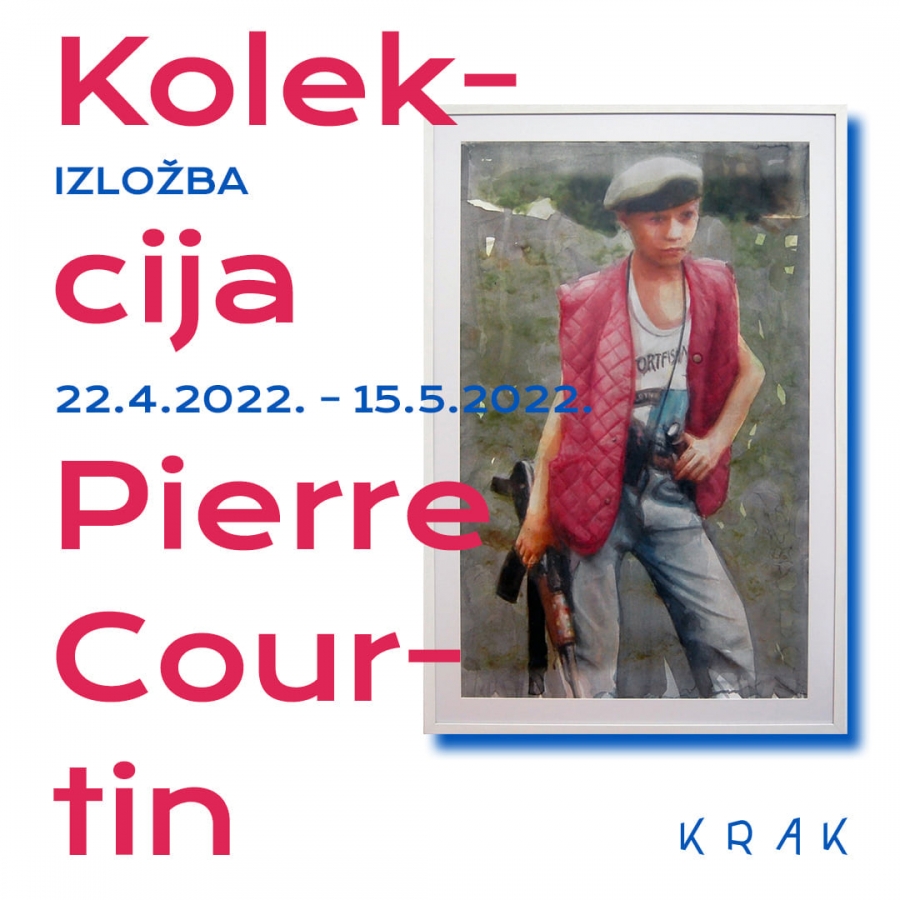 The exhibition Pierre Courtin Collection is a compilation of contemporary Bosnian art created from 2004 to 2018, which was collected with passion and curiosity by Pierre Courtin, then temporary Sarajevan of French origin. The collection has brought together more than 300 art pieces, and the exhibition at KRAK will present only a part of it as an insight into the intensive practice of collecting, documenting and mediating art artifacts during this period. As sort of cultural treasure, this collection raises questions about the status and function of art collecting in Bosnia and Herzegovina at a time when culture and art are systematically moved to the margins of social events. On the other hand, the presence of gallery owner and curator Pierre Courtin in the domestic field of culture and art represents a huge contribution to stimulation of the development of contemporary art practices in the country. The realization of numerous exhibitions, lectures, promotions and round tables are an indispensable contribution to the recent past in the field of art and culture in Sarajevo and Bosnia and Herzegovina.

The beginning of the Sarajevo episode of Pierre Courtin was accompanied by the launch of an experimental exhibition space of an intensive program with a clearly projected vision. The first exhibition initiative called Gallery 10m2 was founded in 2004 in Sarajevo’s Glass City (Stakleni grad) near the pedestrian zone in Ferhadija Street, in an area of ​​10 square meters. Unconventional and relaxed approach to the production of art content profiled Courtin as one of the most important figures on the post-war Sarajevo art scene. The activities that followed over a period of fourteen years—the time he spent in Sarajevo—were marked by progress and the need to grow the exhibition space, which led to several relocations. The last phase which spans over the period six years (from 2012 to 2018) is called Duplex 100m2, and it is marked by activities in the residential unit of the Art Nouveau building in Obala Street.

Through his direct, immediate and often experimental work, Courtin covered several different but similar fields—from commercial gallery activity and affirmation of Bosnian artists abroad through participation in numerous art fairs, affirmation of art collecting in a country affected by the economic crisis, all the way to social practice which is spontaneously and organically generated "on the margins" of his art programs.

Pierre Courtin’s work also coincides with the systemic crisis in culture in Bosnia and Herzegovina. Therefore, his curatorial and managerial strategy can also be understood as compensation for what the official institutions were unable to do. The scope of such an approach covers the errors of official institutions which did not consider themselves invited or responsible to be the initiators of artistic life in their environments. While official institutions were failing, his way of working consciously operated with the context of the crisis and found a certain starting point in it. Ingenuity and adaptability to an unfavorable situation made him flexible and resistant to all possible adversities in a society of devaluation of universal values and art. Today, it is almost impossible to reflect on the content, dynamics and development of contemporary art in Bosnia and Herzegovina without awareness of the presence of Pierre Courtin.

The shutdown of the gallery in 2018 and Courtin’s departure from the country left behind a void which is difficult to fill. The activities of domestic and international actors on the Sarajevo art scene continued through some new independent initiatives which Duplex 100m2 served as a model and inspiration—a sort of model of organization and work.

The exhibition with its accompanying program is supported by the Foundation for Arts Initiatives from New York and the French Institute in Sarajevo.