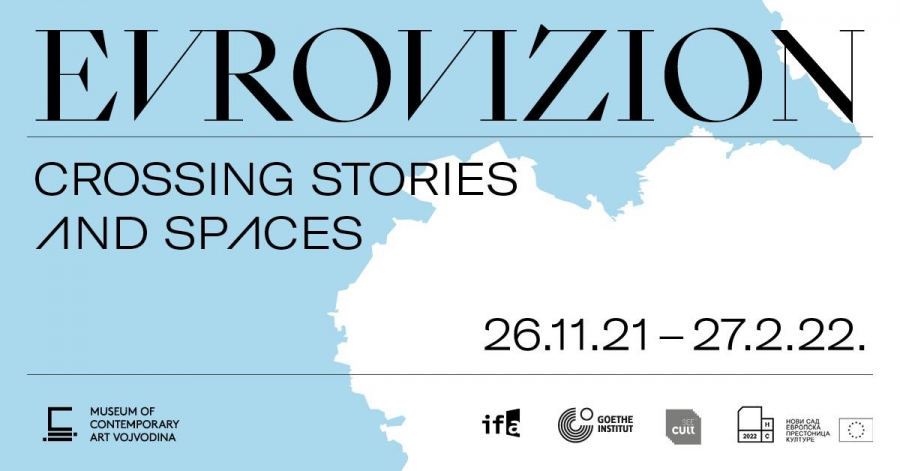 EVROVIZION.CROSSING STORIES AND SPACES is an exhibition by ifa (Institut für Auslandsbeziehungen) and is organized in Novi Sad in cooperation with the Museum of Contemporary Art Vojvodina and the Goethe-Institut Serbia. The exhibition is part of the Novi Sad - European Capital of Culture program.

The co-creative exhibition project explores the current social and political climate in Europe and the idea of a European identity. The focus is on less visible and marginalised geopolitical and cultural spaces, in particular in southeast and eastern Europe. These are so-called semi-peripheries and places of diversity that often play only a minor role in many international theoretical discourses and exhibition practices, such as the multi-ethnic city of Sarajevo – the first venue of the project.

In close cooperation with regional protagonists and each local art scene, new artistic projects will be added to the exhibition during the course of its tour. The aim is to reflect on contemporary social and political challenges, and to make specific local impulses visible in order to generate the continuous and flowing development of dialogue spaces. The exhibition title EVROVIZION is a construct made of similar and yet still different languages – Eurovisione / Evrovizija / Евровизия – a fusion of potential unities; a free version of potential togetherness.

When we started thinking about the project together in May 2019, we very quickly began to consider the aspect of travelling (a touring exhibition) and the wish to enable spaces of thinking within the exhibition. To what extent can crossing through various spaces of the so-called semi-peripheries of Europe change both the space within the exhibition and also perhaps our idea of Europe itself? Which processes will be set in motion during this journey and what effect will they have on everyone involved in EVROVIZION?

It was important to present artistic positions that provide access to the theme of this project through open narrative forms that create STORIES AND SPACES. The artists in the exhibition explore very diverse issues: origin and identity (Nevin Aladağ), personal memory and collective belief (Igor Bošnjak), histories and mythologies (Vajiko Chachkhiani), the politics of memory and the neoliberal handling of trauma (Lana Čmajčanin), the presence of the absent (Johanna Diehl), personal experiences and collective memory (Petrit Halilaj), the mechanisms of radicalisation (Henrike Naumann), the colonial past, present and future (Janine Jembere), posthuman mythologies and future archaeology (Emilija Škarnulytė), the collective self-emancipation of oppressed women (Selma Selman), languages, rituals and identities (Slavs and Tatars), and historical and political memory (Adnan Softić).