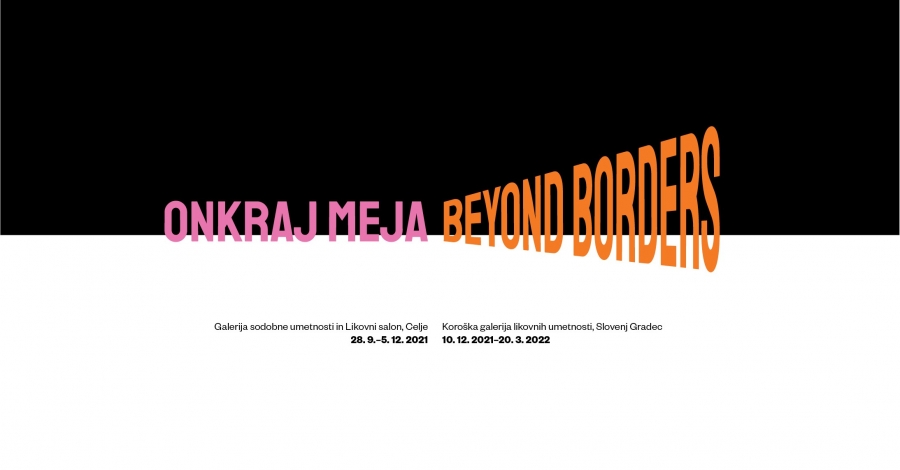 The history of mankind can be read as a history of defining and shifting territorial boundaries. Over the centuries, both the way borders are drawn, and their role has been changing. Since the end of the feudal social order, borders have been increasingly associated with national belonging and national identity, but today they are primarily a means of controlling flows of people and thus represent a complex socio-political phenomenon that has a decisive impact on people’s lives. In defining an individual’s or a nation’s identity, the border appears as an element included either in representations of historical struggles for citizenship and heterogeneous cultural struggles or in utopias and ideas for transforming the world’s common democratic imperative.

The exhibition Beyond Borders presents fragments of reflection on the influences of borders that define people’s living space, push them to the margins of society, make it difficult for them to live in dignity and change their identity. We want to encourage reflection on certain border areas that have raised permanent problems over the last thirty years or where border-related situations have worsened. In their works, the artists outline the real stories and testimonies of groups and individuals in civil society, whose lives have been affected by political borders. Through the artistic interventions presented, they interpret the causes and consequences of the divides in different geopolitical landscapes. They highlight situations related to border crossings and travel, the issue of minority rights, language, citizenship and work, and the separation of families. They talk about the current state of migration flows in Europe. In some projects, they move from utopian potentials to solutions with an activist undertone.

Today, despite the globalisation of the world, physical borders are being re-established through international information, legal and economic divides. Wendy Brown says that there is a paradox in which the permeability of borders in today’s globalised mobility does not mean that they are abandoned, but that in addition to maintaining old borders, new borders are erected where there never were any. Since the fall of the Berlin Wall in 1989, we have seen a proliferation of physical barriers between countries, both within Europe, where some 1000 km of physical barriers and walls are said to have been created, and worldwide (USA/Mexico, Israeli West Bank, Saudi Arabia/Yemen/Iraq, Bangladesh/India, India/Pakistan, Uzbekistan/Kyrgyzstan, Botswana/Zimbabwe, Spain/Morocco …). Last but not least, the newly erected physical barriers at borders also include the barbed wire at the Slovenian-Croatian and the former Slovenian-Austrian border. Brown argues that this is a reaction to the realisation that the concepts of sovereignty and the nation-state are moving away from each other. She claims that the new walls have become symbols of this erosion.

In the case of the European Union, we can trace the tendency set by the Schengen Agreement in 1985: In exchange for less control of local borders, control of Europe’s external borders was tightened. The political processes of the disintegration of Yugoslavia, which took place on Slovenia’s doorstep in the 1990s and ended in war, had long-term consequences that should perhaps be highlighted on the occasion of this year’s 30th anniversary of Slovenia’s independence, as thousands of people are left on the other side of the EU border without a chance for a decent life. Since 2015, increasing migration from war zones to Europe and last year the COVID-19 pandemic have created new border conditions that highlight the disunity of European and global politics and the failure of the Universal Human Rights Project. Individual authoritarian mechanisms are emerging that do not take into account that the image of the world has changed at the expense of the struggles of the past and that new formulas of social policy must be found within state systems that do not demarcate, separate and discriminate. Among the goals of the “workplace of democracy”, Étienne Balibar proposes, among others, the democratisation of borders (which of course does not mean their abolition) through the progress of “human rights politics” and the overcoming of collective insecurity. According to him, we should start precisely with the “state of the nomadic populations ‘shoved into insecurity’, which are the source and target of security obsessions that are closely linked to identity obsessions”. So we need to rethink how to change the historical relations between territories and populations, just as globalisation has already changed the relations between territory, the flow of goods, capital and information.

The artistic investigations and interpretations of situations at the external and internal borders of Europe, as well as at the border between the USA and Mexico, reveal the impressions of the border areas, personal stories or family tragedies, and paint a picture of the map of how these sharp divides are experienced. The works capture a rethinking of historical truths and geopolitical phenomena, but also alternative solutions that we want to highlight as spaces of potentiality if not of the future.

The international group exhibition Beyond Borders, a collaboration between the Centre for Contemporary Arts Celje and the Museum of Modern and Contemporary Art Koroška, will be presented in two venues, striving for different conceptual focuses through a common idea, expanding and transforming them through the artworks and the artists presented in the two galleries. By attempting to contextualise the themes and artworks in a flexible way, we also go beyond the boundaries of the purely physical transfer of the exhibition.