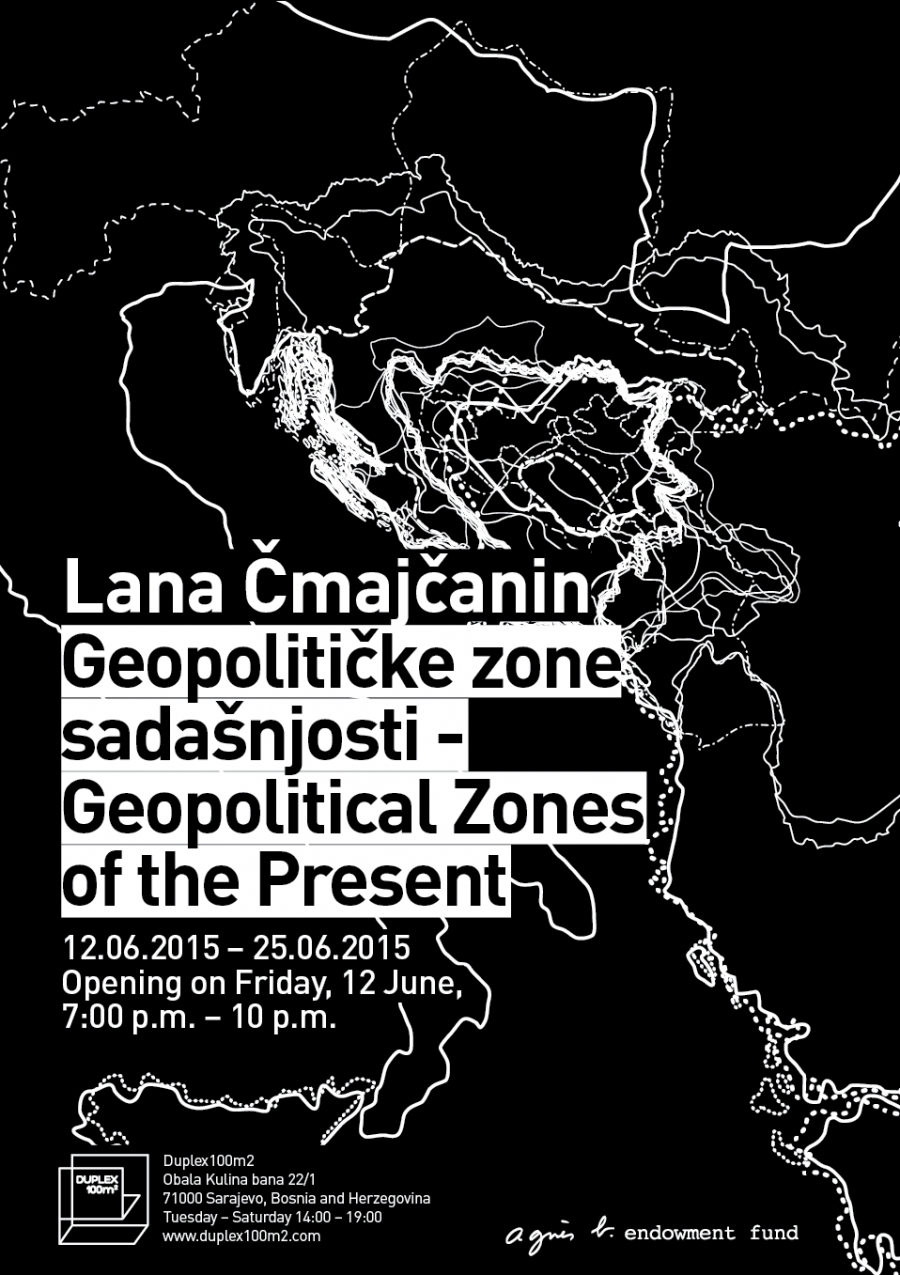 Through centuries, military and political inscriptions of statehood and sovereignty into the landscape of geographic maps have become stagnant strongholds of factual history, fixtures which are never oppugned, in spite of perpetual shifts in the dominant positions of power commissioning their production. Lana Čmajčanin applies the methods of distillation, overlapping and reduction of the content of maps, while utilizing the usual cartographic tools and techniques of etching, drawing, reproduction and representation. The artist thus creates a space which contests the geopolitical historicity of the borders of Bosnia and Herzegovina, from the Roman Empire all the way to the Dayton Agreement.

Lana Čmajčanin’s solo exhibition entitled Geopolitical Zones of the Present includes three spatial installations which, despite their geometrical precision and rootedness in the existing geopolitical, military, didactic and other relevant charts and maps, become blurred locations which undermine universally accepted, yet systematically fabricated, dominant historical truths. The work on these installations, which are interconnected through their engaged investigation of geopolitical space, began with the solo exhibition opened in Ljubljana in November 2014, continued the following month in Rijeka and was finally updated with new engravings and interventions to be displayed at the Sarajevo exhibition which opens on 12 June 2015.

The point in which the artist’s work departs from previous readings and internalisations of geopolitical facts is the installation entitled 551.35 Geometry of Time, which acquaints us with the concept of what might be called geometry of geopolitics. The installation consists of 35 selected maps which defined the borders of Bosnia and Herzegovina during the last 551 years. Overlapping on a lit background, instead of showing distinct and clear borders, these maps evidence their shifts, deviations and instability caused by colonial, imperial, conquering, migrational, martial, as well as ‘peace-keeping’ redesigns. Monumentally conceived with a view to presenting ‘objective’ borders, this installation makes incursion into the geometry of the course of history, since the expected and distinct borders are replaced with a palimpsest of previously subjugated and thus forgotten truths. Palimpsest as a metaphor, transposed from the textual into the domain of visual, calls into question the very linearity of historical time, as well as political and, above all, military strategies of space organisation, thereby highlighting the repetitive patterns of creating (dis)continuous history and cyclicality of historical violence.

Deconstructing this monumental, while simultaneously blurred and illegible installation inscribed with the history of conquests, wars and violence takes us to another thematic assemblage which may be called Geometry of War and Peace. Comprising two sets of glass engravings, this installation testifies to the cartographic representation of history, i.e. charting of borders which here fully coincide. The first set consists of maps filled in with intricate etching marks in line with the patterns used in map legends to designate the locations of military operations. The second set, as a reflection of the first one, includes simplified engravings of linear sketches representing the development of the borders of Bosnia and Herzegovina, taken from school textbooks, i.e. didactic maps. The creation of a link between these two contexts, military and educational, sheds light on the mechanisms that normalise the history of violence, as well as on the normative processes of its perpetuation and reiteration. The engravings thus represent deep and resistant inscriptions, as they overlap and mirror one another in the glass, while emphasising what is evident, yet flimsy and fragile.

The third spatial installation transforms previously engraved drawings of the borders of Bosnia and Herzegovina into the silent, blank maps used for didactic purposes in schools, where they are inscribed with different contents in order to check one’s knowledge. Designed as an interactive projection via an overhead projector, the installation recreates the environment of a classroom which, apart from the maps projected from the slide, incorporates modular cubes as cartographic objects which are playfully moved, assembled and disassembled to define and redefine the knowledge of borders. In the sphere of education, which used to be predominantly women’s territory of numerous female history teachers and educators, geopolitical maps are turned into geographical ones, while repetition of their simplified border outlines and general content creates a geometry of knowledge which does not oppose some previously configured geometries, but rather adopts them as absolute truths. This gender dimension of the artist’s work at the same time implies the necessity of transcending gender stereotypes and engaging women politically and socially in mass exposure of the entrenched historical knowledge, and also calls for the acknowledgement of collective responsibility for the construction of reality and its borderlines.

The moment of confrontation in which the borders vanish, or are erased only to be reinvented through the cycles of historical violence, takes us back to some other works by Lana Čmajčanin as it directly evokes the 2011 installation entitled Tailoring and Sewing. This interactive exhibition dictates that borders should be perceived as tailoring patterns in which the demarcated borders of Bosnia and Herzegovina, tailored in line with the Dayton Agreement, may be customised to fit those who eventually use them and live within or without them. In this respect, the approach is an ambivalent one. On the one hand, there is subversive play with a cluster of nationalist, elitist, martial and transitional interests before and after Dayton; on the other, social responsibility for the change of the current situation is upheld. This essentially entails a dialectic approach which actually implores one to leave the field of (post)ideological lethargy and political, economic and social subjugation and enter the domain of resistance and struggle. Through geometrical fissures in time continuum, Geopolitical Zones of the Present makes reference to this earlier work, which makes the intervention on the meanwhile scientifically founded historical factuality both complicated and inevitable, while it once again evokes forceful and creative emancipation through the medium which metaphorically reflects women’s activity.

Making her artistic positions engaged, Lana Čmajčanin introduces into geopolitical mapping a society whose political subjectivity becomes exclusively and necessarily counter-historical. Thereby she penetrates the geopolitical zone of the present, which now does not act from the position of political power and historical knowledge, but rather from the positions which are erased, subjugated, repressed, yet simultaneously unrestrained by the conventional ruling mechanisms of control. In other words, these positions are left out of the administrative, institutional, scientific and legislative apparatus which is ultimately tuned and objectified by the system of education. Thus a host of relations and processes is introduced, by and in which the society is safeguarded and politically subjectified. This demand for safeguarding society can certainly be read in the context of Foucault’s theses, primarily his definition of the term counter-history, but is by no means reduced to this. It further actualises those social relations which, in the process of creating different geopolitical zones of safeguarding society, advocate for the removal of the borders stigmatised and besmirched by the layers of all that social subjugation and exploitation.

Finally, Lana does not only lend us a critical insight into the factually objectified and stagnant history of those who draw up geopolitical borders. She makes visible the ebb and flow of borderlines, which leave in their wake blurred grey zones of overlapping, dissolving and reconfiguring entities which now call for the construction of some new and resistant artistic narratives: the ones of perpetual struggle against the forces which objectify, control and confine us, simultaneously keeping us in the positions of political oppression and social exploitation.