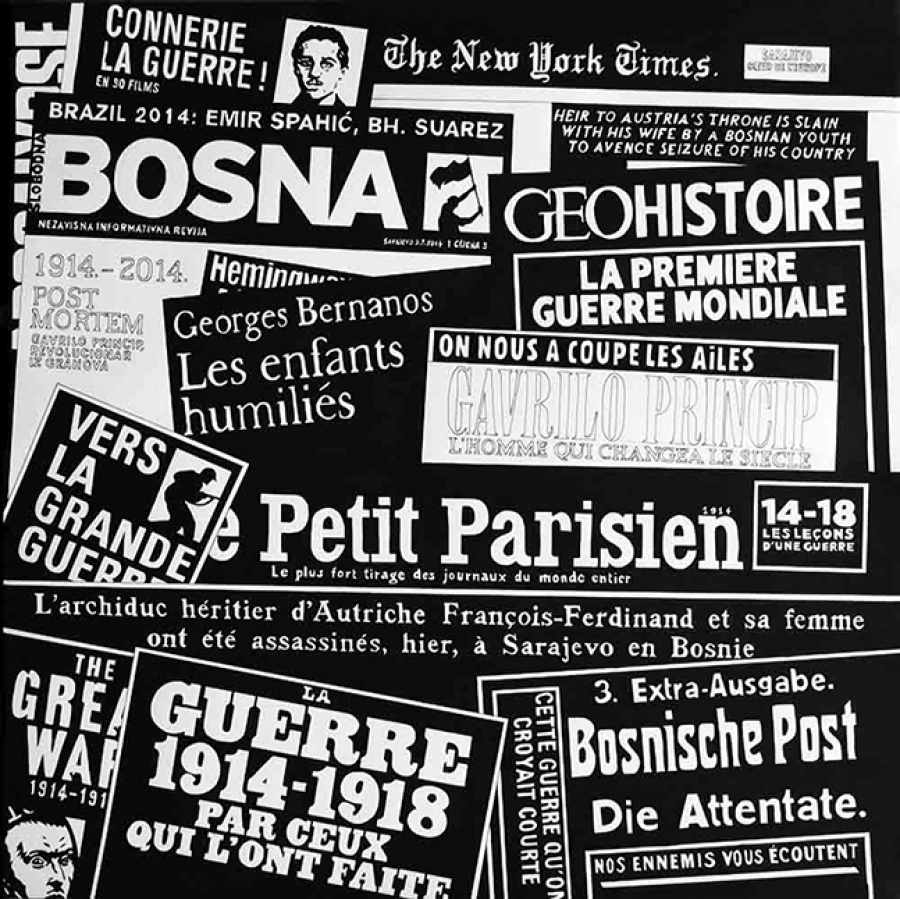 Memories and stories of the First World War: an artistic project linking Saint-Étienne, Belgrade and Sarajevo

The Franz Ferdinand project launched in late June 2014, is the brainchild of artists, researchers and managers to question cultural structures this memory work, as will be shown during the commemorations. If the assassination of Franz Ferdinand represents the beginning of the First World War in Austria as in France, it is also, in Bosnia and in the Balkans, synonymous with anti-colonial struggle against the Austro – Hungarian. It also tells a piece of the history of anarchism in these European countries. Gavrilo Princip, a Serbian student of Bosnia and Herzegovina, Yugoslav nationalist and assassin of the prince, and is a terrorist for the French and for the Austrians. Yet it is a figure of resistance in the Balkans since Princip has long embodied the struggle of people against the Austro-Hungarian and the defense of the Yugoslav ideal Empire. Considered a hero in the Royal Yugoslavia Alexander I as later in that of Tito, Gavrilo Princip was thus celebrated with a plaque commemorating his act in Sarajevo,on the same site of the bombing, which described him as ”a fighter for freedom. ”This plate was destroyed by the Nazis in April 1941 was replaced by another, in turn destroyed by the army of the Republic of Bosnia and Herzegovina during the war in the former Yugoslavia in 1992. Today a new plate holder the message ”Let there be peace on earth“, in English, Serbian, and Bosnian. In this context, it seemed interesting to question the manufacture of these national and international submissions in these commemorations. The memories are the result of various historical buildings and it is important to remember that none of them is more legitimate than another if it does not violate the historically and scientifically established facts. A reflection on the memorial and historical issues, dating back a century, like twenty years, as European French, Yugoslavian, Serbian or Bosnian, seems sensible to take necessary and then to share with an audience. We hope that this reflection is carried by artists whose common trait is being crossed intimately and in their own way by the great history of Europe. Researchers work closely with them to bring their rigor and insight into these memory issues.

This project proposes to use the commemoration of the centenary of the First World War as a starting point for a more general reflection on the construction of national and transnational memories.

The project is the cooperation between cities, cultural institutions and artists.

Three cultural structures, Gran Lux in Saint -Étienne, Duplex 100m2 in Sarajevo and Research station for Contemporary Art Perpetuum Mobile in Belgrade, decided to seize the issue: each invite two artists to observe the commemoration of June 2014 in Sarajevo.

Opening of the exhibition on Opening on Wednesday, 22 April at 7 P.M.

Conference Memories in cities on Thursday, 23 April at 3 P.M.

Introduction by Michel Rautenberg, a sociologist at the University Jean Monnet - The heritage process Cities

Saint-Etienne and the working memory: ownership issues by Fanny Herbert from the Cartonnerie and Stéphane Bonjour (artist)

Conclusion by Marie-Thérèse stubborn, a sociologist at the University Jean Monnet - Art and Memory

The purpose of this conference is to question the place of history and memory in the urban space.

Memory is subject to political and social issues essential that revolve around the differentiated representation of social groups in the public space, and construction of an identity carrier history (whether national, local, across a region, a country or a city).

The proliferation of "places of memory" often wears policy objectives:
It is to tell an official history of the inhabitants that they must appropriate, to give visitors a linear image of the city.

We, therefore, wish to question the way the actors seize the memory in our cities. The city of Saint-Etienne is such subject to significant representation struggles around his working memory struggles that carry the risk of building a fantasy story forgetting the social issues of work at the mine.

We would also question the artistic and cultural actors of three cities in which we have worked: Sarajevo, Belgrade and Saint-Etienne. What institutional independence a collective of artists he proposes through the construction of an art center in the suburbs of Belgrade? How an artist from Sarajevo seized there in the history of a city already told a thousand times by external actors to itself? How some cultural actors of the city of Saint-Etienne-they try to bring other representations in the public space?

The debate will be moderated by the European Network Banlieues d’Europe.

Cultural actors, historians, sociologists and artists are invited to a joint discussion of the issues that now seem essential.

Hostellerie de Pontempeyrat leads this project with the support of the Rhône-Alpes region (Fiacre International mobility component), the City of Saint-Étienne and the French Institute.